This said, podcast listenership has been cooling in recent years and while podcasts are a entree to listening to terrestrial broadcasts for many, in some cases it is drawing listeners from brick and mortar stations.

While nearly two-thirds (63%) say it has no impact on the “real time” they spend with AM/FM, the survey also points to a third of weekly podcast users spending fewer hours with the broadcast station. That is even more true among listeners of news-talk stations, where 39% said they are spending less time with AM/FM in favor of podcasts.

What I found most interesting was that the cooling attitudes toward podcasts seemed to be rooted in advertising. I assumed then that the survey included podcasts created through both commercial and public radio channels because public radio usually just has a brief underwriting message rather than a longer ad that people can potentially skip. The credibility of the ads is seen as super low. I would be interested to see a deeper dive into which company’s ads were seen as more credible than others.

The Public Radio Techsurvey data shows 61% of public radio’s weekly podcast listeners are getting tired of hearing the same ads in the podcasts they listen to, including a quarter (26%) who strongly agree. Just four percent disagreed, while 29% were neutral.

It also shows that host-read ads are preferred to produced spots, particularly among younger listeners. The survey shows 43% would rather hear a host-read ad. But among Millennials that number jumps to 59%.

“The data on advertising in podcasts is an eye-opener. While podcasters like to think their ads are more engaging, our respondents suggest otherwise,” Jacobs says. “While live reads from hosts are perceived as preferable to produced spots, podcast ads overall are no more credible than commercials heard on the radio.” Their data shows just 14% of public radio listeners think the ads they hear on podcasts are more credible than what they hear from their radio.

This last bit got me wondering about the relative credibility of sponsors and advertisers listed in program books, posters, digital signage around arts and cultural entities. I am thinking about this both from the point of view of wanting to provide a bit of a valuable benefit for sponsors and from the perspective of “charity washing” conversations where it appears corporations are trying to burnish their image through charitable giving. If sponsorship placement doesn’t lend credibility to generally sincere companies, it is something of a pity. But on the other hand, if people aren’t fooled by charity washing efforts, that is a relatively positive outcome.

Last week I received an email from Arts Midwest noting that September 9-18 is Welcoming Week, an international effort to provide a welcoming experience at all levels. This includes government and social policy and action to make communities more welcoming to organizational efforts to provide a sense of belonging in workplaces and other social interactions.

The concept of creating more metaphorical doors through which people can engage with arts and cultural organizations is a frequent topic here so I wanted to call attention to the effort and some of the resources that are available. In addition to the Welcoming America website, Arts Midwest created a page of resources focuses on how arts organizations can create that sense of belonging for employees and community members with whom they interact.

Arts Midwest is also hosting a webinar on Wednesday, September 14 4 pm EDT/3 pm CDT/1 pm PDT on the topic with a focus on “how arts can transform, deepen, and enrich immigrant inclusion work. ”   Sign up if you would like to learn more.

Always happy to draw attention to the good work of arts organizations, I was pleased to get a comment on yesterday’s post about creating contests and engagement events which expect artists to work on spec.

In her comment, Eva Buttacavoli, Executive Director of The Contemporary Dayton in Ohio writes about her organization’s efforts to create the expectation that artists should be paid for their work.

In EVERYTHING we do, we have and will continue to, pay artists for their work. We actually also pay for all RFP finalists’ specs – and, as the city’s art center, we use requests for art (for festivals, lobbies, walls in blighted areas), to teach community leaders (and the folks who ultimately write the checks) that we have a culture of and expectation to pay artists – and we actually will not help promote or support any project that does not. Our artists have learned to champion themselves and their work – and have passed that expectation along to most projects for which they are invited.

She includes a link to a recent effort where artists designs were used on vinyl wraps placed on electric boxes around downtown which seems like a fun idea for other communities to pick up on – https://www.downtowndayton.org/artwraps/ 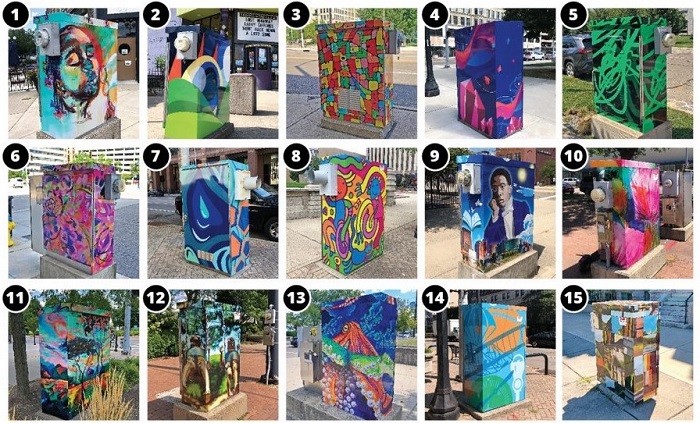 Last week Hyperallergic ran a piece asking why the New York Department of Sanitation (DSNY) with a budget of $1.9 billion was asking artists to submit proposals to decorate their trucks for free.

While the artists will supposedly retain all rights to their work,

…artists will receive no compensation, and that they will grant both DSNY and partner organization the Sanitation Foundation the “royalty-free, non-exclusive right to use and/or reproduce the designs for non-commercial and/or educational purposes.”

Artists will have three, seven hour work days to execute their design on a truck at the end of September.

NYC based artists, who face the city’s high cost of living are concerned about the lack of compensation in return for helping DSNY realize their goals.

A few weeks earlier I saw a similar conversation occur in response to a call by an arts advocacy group for submissions of images to be used in a national ad campaign. The winning designer would be compensated for their work. The issue was that artists were being asked to design for a major project on spec without any compensation.

If a designer is doing a logo for a local company, there is a significant amount of work they invest in research, multiple design iterations, etc,. If they are working on spec, that is a lot of time and energy invested that could be spent on other projects with guaranteed payment. For something that would be used nationally in a promotional/awareness campaign, they would likely invest that multiples more effort into research and design with the goal of making it as perfect as possible.

This is something to keep in mind when running poster contents or similar projects in relation to your arts organization. The goal of raising awareness and engagement with your organization is often a worthy one, but evaluate whether it is being done with full consideration of the time and effort that will be required to complete the task to the apparent standard. It is probably best to consult with someone who does similar work before soliciting submissions because what you imagine is a 20 minute effort may actually require two days at minimum.