When I mentioned organizations addressing issues of health and safety in my post yesterday, I was thinking about Maslow’s Hierarchy of Needs.

Between high school and my first couple years of college, I felt like every class except for foreign language and mathematics brought Maslow’s hierarchy up as a way to open up a conversation about what motivates humans. If you aren’t familiar with the pyramid below, Maslow’s theory said that the lower needs on the pyramid below had to be satisfied before people could move on to higher concerns. So you need to be secure in physiological and safety needs before you can work on intimate relationships.

It should be noted that despite the popularity of this model, there is no scientific data to back it and studies have found that different cultures prioritize needs differently. 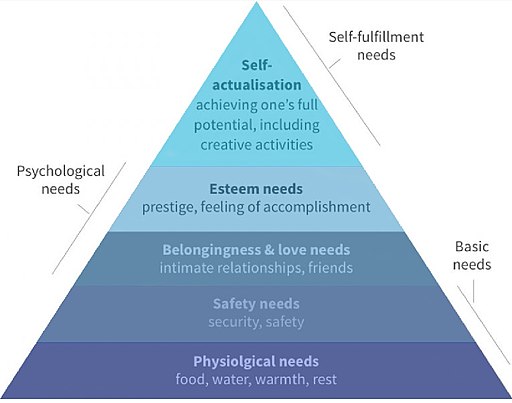 I mention these criticisms of Maslow’s hierarchy because it is easy to look at this pyramid and get the impression that creativity has to wait until all these other needs are met. This reinforces the idea that arts and culture are a luxury that should yield before all the necessities have been addressed. I think we all know there will always be something else that needs to be solved if you subscribe to that thinking.

I will confess that I engaged in that mode of thought at one time. I was elated by the idea that being able to engage in creativity was a sign that you were approaching your fullest self, but depressed when I realized you pretty much had to be independently wealthy if you were going to check-off all the lower levels in order to get to the peak.

I think the case can easily be made that creativity has an important role at lower levels of the pyramid. Shared creative activities contributes to belongingness. Social groups or clubs whether oriented around religion, service, sports or creative activities all create a sense of belonging.

So too does creativity contribute to the next level up, esteem. Feeling that you have mastered a technique or have enough of a grasp of the fundamentals to metaphorically start drawing outside the lines with confidence can bolster self-esteem.

Continuing to develop all your skills, be it creative, personal, emotional, professional, etc eventually leads you to self-actualization as defined by Maslow and others. However, creativity for its own sake, (as opposed in pursuit of securing safety and physiological needs), begins to factor in much earlier.

So don’t be fooled by this popular image into thinking that creative activities are the last thing that people need in their lives.

Americans For The Arts is hosting a couple webinars to help the arts community deal with the situation surrounding Covid-19.

It appears that both will be archived for those who can’t watch live.  If you follow the links in the titles, you can register to participate.

I have seen the link to this first meeting shared by multiple groups so it is likely to be heavily attended.

We Are Stronger Together: Navigating Crises and Sustaining Healthy Relationships in the Era of Coronavirus

As a result, the performing arts presenting, booking and touring industry is navigating uncharted waters, as we look to both contracts—and to each other—for direction. Join the partners of the Alliance for Performing Arts Conferences (APAC)*, as we host an informative, field-wide conversation with presenters, agents, artists, and legal and emergency response experts around the current business, legal, financial, ethical and relational realities we are facing TOGETHER.

The second webinar appears to be more focused on organizational plans and policies during the crisis, including providing support for staff and others who may be experiencing anxiety.

Arts and Culture Sector and the Coronavirus: What we Know and How to Move Forward

March 19, 2020 at 3:00 PM EST
Join members of Americans for the Arts’ staff, Ruby Lopez Harper, John Rubsamen, and Narric Rome, with Jan Newcomb, Executive Director of the National Coalition for Arts’ Preparedness and Emergency Response, Barbara Davis, Chief Operating Officer of The Actors Fund, Rhonda Schaller, Assistant Vice President for Student Affairs and Visiting Associate Professor at Pratt Institute, and a representative from the National Endowment for the Arts to hear current information about actions to take, including: planning to consider, handling grant funded projects, managing stress during moments of crisis, and continuing to support artists. This briefing will also include an update on the status of congressional action on economic impact and stimulus funding and how it relates to the arts and cultural sector.

You may have heard of Haaheim before. He was feted as the scientist who secured a position playing timpani with the Metropolitan Opera Orchestra. While he says he is not talented, did not go to a major music school and doesn’t have a graduate degree in music, he did not simply walk in off the streets and secure a position the way the stories make it sound. The Met was his 28th audition in field of international orchestras. (He frequently refers to himself as a tenacious loser.)

The fact he wrote a 13 part series on deliberate practice is pretty compelling evidence that he has has invested a lot of time and energy into the act and evaluation of his practicing. He projected his ratio of  hours spent in solitary practice to working under the supervision of a mentor at 112:1

But note, while he says you have to be willing to put in the time, by no means does he claim that they who clock the most hours are the winners. As with the posts I have previously made about deliberate practice, no benefit is accrued if you aren’t paying attention to what you are doing, reflecting upon the experience, collecting feedback from others or by self recording, and analyzing it all. Going through the motions yields very little and may even be harmful if you aren’t paying attention to stress and tension.

In his view, the process of deliberate practice has an exact correspondence with the scientific method where you identify a problem, formulate hypothesis and solution, test, gather data and, analyze.  While that may sound sterile, Haaheim frames many of his posts in pop culture references. For example, the title of one post is: Unless Your Phone Is in Airplane Mode, You Are Practicing like a Nazgûl, in which he compares the influence phones have over minds to the fact a Nazgûl’s will is subsumed by the Dark Lord, Sauron.

So if you have read about the process of deliberate practice but are unsure how to structure a regimen for yourself, Haaheim lays out a pretty thorough road map in his recent post which includes a hyperlinked annotated index of his previous 12 posts on the subject.

The prologue to the interview mentions the term creative placemaking has been criticized for:

1) suggesting that the people and cultures rooted in a place had not already made it; 2) initially lacking a clear statement of values regarding who was meant to benefit from the community development of which the arts and culture were a part.

In response, people have started using the term creative placekeeping instead. I have heard this come up at a number of conferences I have attended. However, Bedoya notes that while there are legitimate concerns about gentrification and displacement– or replacement, especially in the eyes of communities of color, there is a need to be cautious with the term placekeeping as well.

The trap around place-keeping is sentimentality — “I want the old days” — and it’s not thoughtful. What are we trying to keep, and how, so it stays fresh and new? I think the future of creative placemaking is people not as intensely problematizing it, but trying to figure out the actions associated with placemaking or keeping, to create agency and a notion of civic commitment.

I found this idea of examining how to bring freshness to the elements we are trying to “keep” very intriguing. If you fear the loss of front stoops/porches in your neighborhood, what it is that will be lost? Is it the safe place for kids to play away from the streets? It is the socialization found in waving to neighbors as they pass or inviting them to mount the steps to chat? Is there a way to maintain that somewhere or someway else?

Though as I continued to play my example out in my head, I would think it would almost be preferable that porches and stoops replace a central gathering place that is being repurposed than to lose the stoops and send everyone to gather in a central place.

Another section I that caught my attention was Bennett’s comments about the scope of vision needed for implementing placemaking/placekeeping plans so that it encompasses all potential benefits and consequences. (my emphasis)

How do you figure out if your actions contributed toward healthy, equitable, and sustainable communities? Professor Andrew Taylor at American University reminded me that the first rule of systems thinking is that there is no such thing as side effects, there are only effects. If you are experiencing something as a side effect, it means you haven’t drawn the boundaries of your system widely enough. Many people say, “I’m making an economic development play, and there is an unfortunate side effect that people are displaced or replaced,” to borrow from Roberto. We need to draw the boundaries of our system wide enough that we understand that those are not unrelated or accidental, but part of one system.

At first I thought about how difficult it is to anticipate all the effects a plan might have. But as I considered longer, I realized if you are paying attention to what is happening in other communities that are implementing similar efforts, it isn’t difficult to become aware of the potential positive and negative impacts. Using the term “side effect” in these instances seems like an attempt to minimize the importance of these problems. Acknowledging it as an effect of a plan is to take responsibility for the problems it may cause.

If someone tells you one of the side effects of eating spaghetti sauce is a 80% chance you will have a sleepless night of heartburn, that really isn’t a small issue to you. If that is something you face, you consume the marinara sauce fully aware that any difficulty sleeping is a consequence of your decision and no one else. Likewise, if you are serving spaghetti and offer no other options, you should be aware that it is possible your choice will cause discomfort for some guests.