While I try to write posts about the arts in general, the fact is the content of my posts tends to orient toward performing arts rather visual arts. That said, there are a lot of parallel experiences that crop up across all disciplines. I caught a Hyperallergic post today by Paddy Johnson who was offering advice to visual artists about career viability if you don’t make art for art fairs and the value of insider/outsider feedback.

The first artist was concerned that by not participating/being invited to some of the big art fairs currently occurring, the opportunity for media coverage and recognition necessary to advance careers was being lost. I saw parallels with performing artists who don’t focus on musical theater/Broadway type content or popular trends in music in their practice and felt marginalized.

Johnson points out the oft stated sentiments about niche genres not representing the whole art world and bemoans the fact that such a narrow focus will end up stifling creativity:

The trouble, of course, is that fair art is only one form of art making, and within that environment, it’s pretty easy to forget that other types of art exist. If the main opportunities for visibility center on blockbuster events and sales, outrage, and influencer fodder, then yeah, the people forging unique paths will be perceived to have less value and fewer avenues for visibility.

And that has real consequences for art because it means less diversity, less experimentation, and ultimately a culture where innovation can’t flourish.

However, she also reminds us even outside the arts, performing at the highest level of excellence is not financially rewarded. While some have day jobs to support their creative lives, for some day jobs can preclude being able to attain the highest levels.

In professional distance running, even successful athletes often don’t earn enough from their work to make a living, and taking a job to pay the bills is discouraged. Most runners do not make enough money to cover health insurance and maintain a full-time job, despite running up to 130 miles a week. Most have little to no name recognition despite working at a level almost no other humans can match.

Sounds familiar, doesn’t it? The exploitation of labor looks roughly the same in the arts, where most professional artists don’t make enough money to pay their bills and work in relative obscurity despite enormous talent and visibility within their field.

Johnson answers a second question in this post. I was almost going to omit it but I feel like it raises a common issues that doesn’t get a enough discussion in every creative discipline — whose opinion about the quality of your work should be trusted?

People without a lot of experience interacting with your discipline provide effusive feedback, but the artist doesn’t value it highly viewing the commenters are too inexperienced to provide insight. However, the highly informed insider just makes brief, vague, enigmatic comments that imply something but equally lack insight.

Johnson’s answer here suggests questions to use to draw out better feedback. But what I really liked was that she points out that just as not every highly accomplished person isn’t suited to teach excellence in their craft, every insider isn’t skilled at providing useful feedback.

If you want better feedback from your visits, you can ask questions like, “What is it about the red in this painting that works well for you?” or “What places are you thinking I should take this?” If your visitor is not a dealer or curator you want to show with, you can try inviting criticism. “Does [xyz thing about the art] seem like a problem to you?” A supportive studio visit isn’t defined by complimentary feedback so much as it is valuable feedback. If you have areas of an artwork you’re unsure about, this is an opportunity to discuss!

That said, potential collaborators who engage in your art superficially may not be good partners. When their responses bother you, don’t ask them back. Even bad work can evoke thoughtful feedback, so the art is not to blame!

You may have seen news about Ulster County, NY’s demon-spider I Voted sticker. It made national news because the design by 14 year old Hudson Rowan was so strikingly cool/strange and garnered a huge majority of votes last summer to become the official recognition sticker for the county. 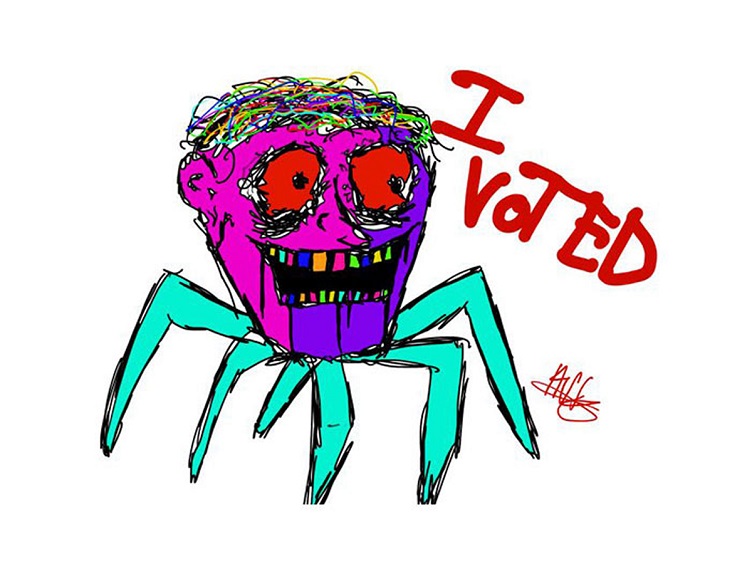 But a lot of places have their own distinctive flavor they apply to the stickers. A Bloomberg News article lists a number of them. Some of them are the result of an official branding effort, others like those in Alaska, feature images of wildlife created by high school students.

Of course, one of the first things that occurred to me is that this is one of those places in which civics and art can intersect. It might be worth the effort for local arts organizations and schools to look into whether there are opportunities to contribute to state or even county level sticker design. Getting students and artists actively involved in creating images for election stickers can potentially have beneficial effects.

These stickers brought to mind an entry I did a decade ago about Japanese manhole cover designs which are specific to every city in the country and reflect some degree of local pride. (Happily the Flickr account housing photos of the covers still exists so you can check out the cool designs.)

That post reminded me about a post I wrote on efforts in Lanesboro, MN where they had placed cast iron medallions around the community so visitors could engage in a sort of scavenger hunt. Not to mention the poetry verses that appear on signposts in parking lots around town as well.

I was interested to see there was some research conducted with some of the earliest recipients of MacKenzie Scott’s unrestricted gifts to various non-profits between 2020 and 2021. The median of the grants she distributed was $8 million as compared to a median of $100,000 given by larger funders in recent years.

To be clear, some of the organizations Scott targeted in the first few rounds of giving didn’t sound like they had been getting anywhere near $100,000 grants. The biggest finding of the study was that the Scott grants weren’t just transformational for organizations, they were equally transformational for leaders who found they no longer had to lay awake at night worrying about keeping doors open. Now they not only felt secure in knowing existing programs could be executed, they began to dream about what else it might be possible to accomplish.

In interviews, more than three-quarters of leaders discussed the shift in their thinking that accompanied the receipt of this gift. A scarcity mindset was replaced with an opportunity to pursue transformational possibilities, as leaders were able to reimagine their organizations “in the ideal way to achieve the biggest impact that we could have.”

Close to two-thirds of interviewed leaders described a sense of relief and breathing room after having received their grant. Many told us of the opportunities to innovate and take risks that their grant has afforded them, knowing their organizations are now more financially secure. “It’s an opportunity to be innovative and creative because we have more foundational support,” said one leader. Another said, “For us to have money to pilot something to see how it goes is just a miracle from heaven.” Other leaders put aside a specific portion of the gift specifically for bold or risky ideas.

The most striking response for me was a leader of color talking about how she felt affirmed and vindicated after worrying her presence was a liability to the organization:

I’ve been told about two million times that organizations led by women of color get less than others,” one leader told us. “So, I was nervous about this because I’m thinking, man, I hope that who I am doesn’t cheat this organization out of opportunities, you know? And that’s a sad thing to even admit to you, but I did think that.” The grant from Scott was powerful for this leader because, as she put it, “it positioned being a woman of color as an asset, not a liability.”

What was also encouraging was that the concern others funders would reduce their support of recipient organizations was unfounded. In many cases, the organizations reported an increase in overall fundraising after receiving MacKenzie Scott’s gifts.

I saw a tweet by Maria Popova linking to a piece she wrote about the philosopher Seneca’s thoughts on gratitude and thought it might make an appropriate post for Thanksgiving. Seneca was a proponent of the idea that giving should be done for the sake of giving, not receiving anything in return.

There is not a man who, when he has benefited his neighbour, has not benefited himself, — I do not mean for the reason that he whom you have aided will desire to aid you, or that he whom you have defended will desire to protect you, or that an example of good conduct returns in a circle to benefit the doer, just as examples of bad conduct recoil upon their authors, and as men find no pity if they suffer wrongs which they themselves have demonstrated the possibility of committing; but that the reward for all the virtues lies in the virtues themselves. For they are not practised with a view to recompense; the wages of a good deed is to have done it. I am grateful, not in order that my neighbour, provoked by the earlier act of kindness, may be more ready to benefit me, but simply in order that I may perform a most pleasant and beautiful act; I feel grateful, not because it profits me, but because it pleases me.

I happened to click a little errantly and saw Popova’s most recent post quoting John Steinbeck who felt it was more virtuous to receive well than to give.

It is so easy to give, so exquisitely rewarding. Receiving, on the other hand, if it be well done, requires a fine balance of self-knowledge and kindness. It requires humility and tact and great understanding of relationships. In receiving you cannot appear, even to yourself, better or stronger or wiser than the giver, although you must be wiser to do it well.

It requires a self-esteem to receive — not self-love but just a pleasant acquaintance and liking for oneself.

In fact, Steinbeck apparently had felt a degree of disdain for wealthy philanthropists who gave large sums after engaging in extractive and exploitative practices, a situation to which we may have circled around to again by some measures.

Perhaps the most overrated virtue in our list of shoddy virtues is that of giving. Giving builds up the ego of the giver, makes him superior and higher and larger than the receiver. Nearly always, giving is a selfish pleasure, and in many cases it is a downright destructive and evil thing. One has only to remember some of our wolfish financiers who spend two-thirds of their lives clawing fortunes out of the guts of society and the latter third pushing it back. It is not enough to suppose that their philanthropy is a kind of frightened restitution, or that their natures change when they have enough. Such a nature never has enough and natures do not change that readily. I think that the impulse is the same in both cases. For giving can bring the same sense of superiority as getting does, and philanthropy may be another kind of spiritual avarice.