Over the years, I have written a fair bit on culture passes that various European countries have distributed to young people.  In addition to passes for cultural experiences and goods, some of the passes have been focused on facilitating rail travel so young people can experience a wider swath of national and international places and events.

According to a Guardian article from last week, Germany is the most recent country to tee up a program.   When Germans turn 18 they will receive a €200 Kulturpass. The goal is to not only get young people engaged with cultural activities, but to also inject some economic vitality post-Covid.

…has twin aims: to encourage young adults to experience live culture and drop stay-at-home pandemic habits; and give a financial boost to the arts scene, which has yet to recover from repeated lockdowns.

The finance minister, Christian Lindner, described the pass as “cultural start-up capital” that its recipients can use within a two-year period for everything from theatre and concert tickets to books or music. It will be managed via an app and a website that provides a direct connection to a virtual marketplace of everything from bookshops to theatres.

Perhaps most interesting is that the program is intentionally designed to have the 18 year olds “shop locally” as it were and excludes large online platforms and purchases.

Online platforms such as Amazon and Spotify have been excluded from the scheme, which places an emphasis on smaller, often local organisations, such as independent cinemas and bookshops. Individual purchases will be limited in value to prevent someone from using the voucher to buy, for example, a single concert ticket for €200.

I am curious to know if the German government analyzed the programs in places like Spain, France and Italy for design problems. The goals of these other countries were similar in terms of stimulating interest in in-person experiences. The German program seems to have more restrictions built in to achieve that.

I was out taking a walk this weekend and flipped over to the NPR livestream just as an episode of the Splendid Table came on. As they introduced the second guest, Priya Parker, I wondered why her name sounded familiar until I recalled Ruth Hartt frequently cites Parker’s book, The Art of Gathering.

The interview with Parker starts at about the 35:30 mark  (if you want to miss Chef Vivian Howard’s discussion of a pine needle and rosemary turkey brine that makes you house smell like a Thanksgiving scented candle as you cook the bird, that is your business). She talks about the power of the guest in a social situation. While the host has a type of power, the guests decide whether they will assent to the rules.

Among the examples she gives are a guest at a housewarming party who asked everyone to go around and talk about what they liked about the house. Parker points out that for a host to initiate that would seem a bit arrogant and self-centered, but for a guest it is something of a gift to the host and centers the event around the reason for the gathering.

At host Francis Lam’s encouragement, Parker also shared that while she was on her honeymoon, a wedding guest emailed them with a list of 20 things they loved about the wedding. Some were things that Parker and her husband knew about, but quite a few on the list were moments of delight that the newlyweds didn’t witness. Parker says this is an example of a guest contributing to the “meaning making” of an experience. It is a reflection back to the host and perhaps other guests on those things that made the event special.

It occurred to me that social media helps people in doing that reflection, though it also can cause people to strive to manufacture meaning they hadn’t felt so that they can participate with the rest of the group. Perhaps much like the surfeit of standing ovations at the end of performances.  Though she says there is a specificity that delineates meaningful reflection from an expression of gratitude.

I figured I had enough to turn into a blog post and apply it to performing arts when Parker launched into a anecdote about how guests impacted her experience at Bemelmans Bar in NYC’s Carlyle Hotel. The bar features murals by Ludwig Bemelmans, the creator of the classic Madeline children’s books.  She related how she had been there with friends when a pianist emerged and began playing at about 5:30 pm.

About a half hour later, three people came in and sat at a table near the piano, turned their seats to face the performer rather than each other and then applauded at the end of the next song. That drew the attention of the rest of the bar  to the pianist and they began applauding as well. From that point on, there was applause after every number and people shifted their chairs around to face the piano.

Parker said the conversation didn’t stop at that point, but the pianist was acknowledged at every interval for the rest of the night. She said the action of those three people contributed to the magic of the experience for her because they “change the social contract among the guests” with a small gesture and “suddenly we belonged to a place.”

As I referenced earlier, this is an illustration of the power that guests wield in a social situation. At first, the agreed rules were that guest could ignore the musician. Then three people came in and changed the rules of the room from the musician is providing background music for your conversation to the musician is providing a performance for all of us. It would have been difficult for the host/management to demand the room pay attention to the pianist when he started playing, but three people were able to non-verbally communicate a new lens for the experience and the group complied.

It make you think about how much we should be grateful to audiences for contributing to the success of an evening.  Of course the logical extension of that is that we need to focus more on the experience and enjoyment of the audience.

My nephew is in the throes of writing essays for college applications so perhaps that is why a Twitter thread by author Kelly Barnhill caught my attention a month ago. She talks about how neighborhood kids have been coming and asking her for help in writing the essay. She writes about all the writing exercises and ensuing conversations she has with them trying to draw information and realization out.

But the part I really honed in on was this one:

One kid said, "But how can I write that? Doesn't it need to be *about* something?" And I say, "Yes. It is. It's about YOU. What you've written is a bunch of paragraphs about your grandma. And she's great! But what we need to focus on is YOU."

She goes on to talk about how people often don’t know themselves well enough to write about themselves and in fact other people might have greater insight about you than yourself. Which is probably why it is easier to write about your grandmother.

But this resonated with me on a more practical level because I feel like the college essay about how you overcame obstacles in your life was a new enough subject when I was applying to college that it was relevant to your admission. Now, decades later it is cliched and overdone making it all the more difficult for a person with 17 years of relatively unexamined life experience to set themselves apart from other applicants. (And it probably doesn’t help that college admission consultants are telling his parents he would have a better chance of gaining admission to his top choices if he lived in the Midwest rather than East Coast.)

While Barnhill doesn’t say how successful her essay writers are in getting into their top choices, I appreciate that she provides a rather detailed accounting of how she helps create an essay that better reflects their authentic self.  She is giving them the bones of a learning how to learn process that can serve them well throughout their lives if they pay close enough attention.

Also, it occurs to me that she is inadvertently giving an answer to the oft asked query regarding a work of art – “What’s it about??, What does it mean?” Art doesn’t always have to be about SOMETHING to be about something.

Okay, a little bit of a rant today. I have wanted to get this off my chest for a couple years now.

Who decided that greeting customers with “What can I get started for you today?” was a good idea? To my mind it doesn’t build a relationship with the customer and in fact undermines the customer’s confidence that the interaction will end satisfactorily.

When I was first greeted with that phrase in a local, independently owned coffee shop, my first unconscious thought was, “Are you not going to finish my order?”  I had the same thought on every subsequent visit and it created a sense of unease in me. But I knew the guy who started the shop so I thought maybe he had read about using the phrase in some management text and while I thought it was something of a miscue, it didn’t really bother me too much. Except that there were times that they did indeed mess up my order and that of my colleagues and it caused me to pay closer attention to my transactions going forward. Moreso than other places I chose to eat.

Then I started hearing the “What can I get started…” in other food service encounters and it definitely undermined my faith that they would get my order correct. Especially in those places where your food is subjected to an assembly line process where the person who you communicate your order to is indeed only starting it, use of the phrase only draws additional attention to the likelihood that things may not be completed correctly. Not only do other people often substitute in for the person to whom you rattled off your request,  the person at the end of the line doesn’t even know what you ordered and has to ask you.

Now, in an environment where places have signs up begging your patience because the location is understaffed, the lack of confidence is compounded.

So I am just bewildered about how this phrase became so commonplace that corporate chains and independently owned shops think there is some benefit to using it.

When stores call their customers guests and the employees team members, it is pretty transparently a superficial effort that doesn’t fool anyone, but at least you understand that the attempt is to make customers and employees feel special. I don’t understand the point behind the “what can I get started…” phrase.

I wonder if it might be a matter of a slogan by committee or the highest paid person in the room flexing their influence.

I sort of wondered the same thing about slogans on the Amazon delivery vans. 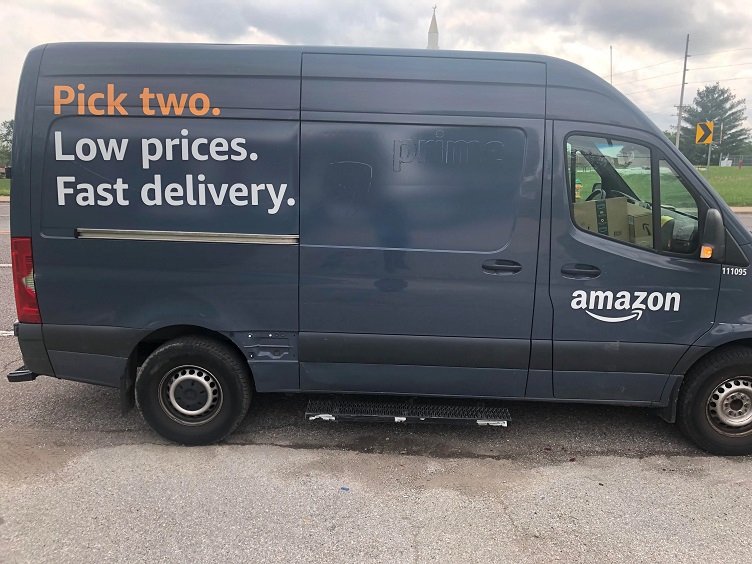 They have messaging that promises low prices and fast delivery, but it evokes a bit of shared culture pre-dating the internet that has entered the collective consciousness. It utilizes slightly different wording each time, but gives you the option of cheap, fast, and quality, saying you can only pick two. So every time I see one of those vans, I feel like it is basically saying I can get it fast and cheap, but the product is going to be crappy quality.

I can only think that Amazon chose to evoke that meme idea due to marketing by committee or some boss thew their weight around. 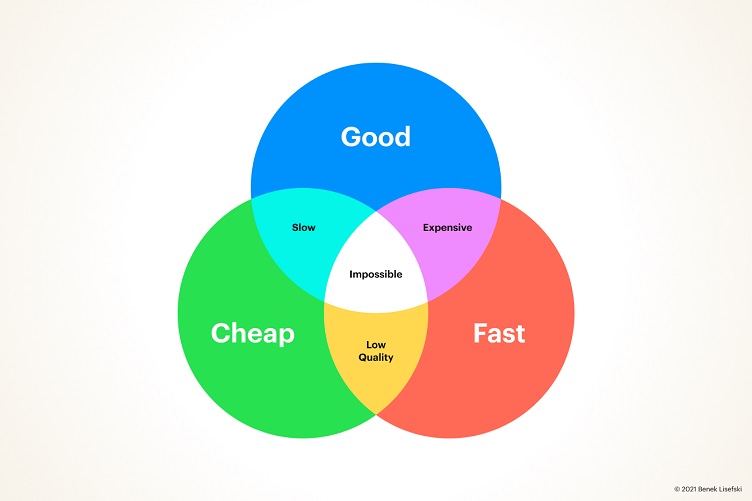