There was an article in Forbes last month about the glut of empty museums in China. While many museums in the United States have larger collections than they can possibly display, storing the majority in basement vaults, museums in China have the opposite problem in that there is more museum space than objects to display.

Part of the problem, according to Forbes is rooted in the way commercial property development is handled,

According to Johnson, what has fueled China’s museum building boom has been a strategy where a local government will grant a developer a prime parcel of commercial construction land on the contingency that they also build and operate a museum (or an opera house, library, etc). In this way, a city can obtain their iconic public buildings while having someone else pick up the tab.

…After receiving accolades for building a world-class landmark, the developers often find themselves in more unfamiliar territory: actually running a museum.

“That isn’t to say that they can’t hire someone to be the curator to develop content, but at the end they don’t really care,” Johnson proclaimed. “They’re building it because they want to build the tower on the site adjacent to it to make their money.”

It light of this, it was somewhat ironic that on my recent trip to China, I found myself touring an extensive display depicting the Ancient Tea-Horse Road and elements of the Naxi ethnic minority in the basement of a family owned hotel in Lijiang. The owner and her father had created a 120 meter long diorama showing each stage of the journey in the tea-horse trade. (Though they currently only have room to display 80 meters.)

The floor of the basement are reverse frosted plexiglass with pictographs of the Dongba script once used by the Naxi along with the corresponding Chinese hanzi and English translation. The owner described how she, her husband and a friend created each panel.

The owner and her father spent a great deal of time and money both personally and hiring scholars and artists to assist in creating the diorama and floor displays. Clearly a labor of love and a testament to their pride in regional history and Naxi culture. But it is only accessible to guests of the hotel who are personally accompanied by the owner.

My sister and I just happened to choose the hotel from those that were available and then noticed the reviews mentioned that there was an amazing display in the basement.

I didn’t really press the owner to learn why her family continues to invest so much effort in a project so few people will ever see. Judging from the superior service and hospitality ethic she exhibited during our stay, it may just be rooted in the idea that pursuit of excellence brings it own rewards independent of external recognition. 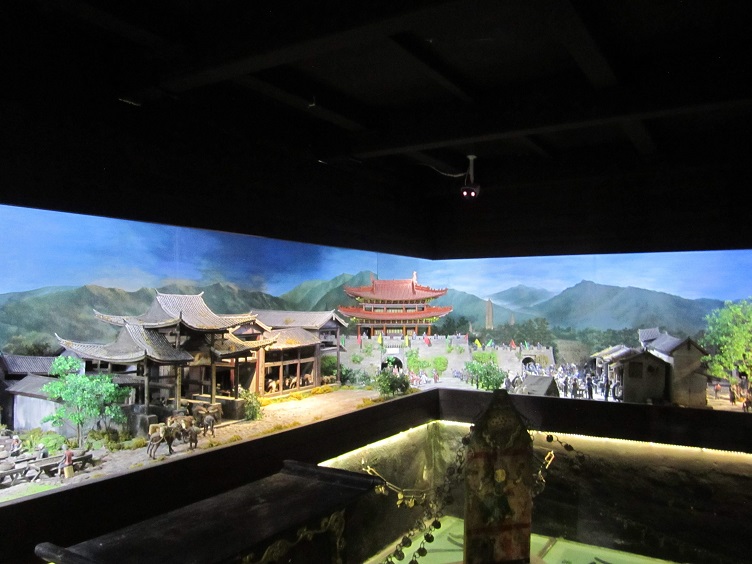